The protest-denunciation made by the Art World… from Art

Who were the Amazons? Are they a myth, as happens with many marvellous stories, or do they have some truth. In this exhibition, the curator starts with a suggestive question: do Amazons still exist today? If this question is answered after experiencing the exhibition, perhaps we will agree with her in the affirmative.

The Amazons, warrior women from classical mythology, have been a fascinating model for visual artists throughout history. And this has not changed in the 21st century.

The Amazons of ancient Greece were descended from Ares, the god of war and the nymph, Harmonia, therefore their feminine condition would be marked by paternal bellicosity and the concord of maternal harmony. This leads us to the impossibility of imagining coherence in their conduct. Due to this genetic weight based on a warrior father par excellence, irascibility and a superlative misandry had to triumph, of which led them to have, in their monarchical regime, only queens, keeping the men as servants. These warriors owed their name, Amazon, “those without a breast”, to their custom of amputating one of their breasts so that it would not hinder them in the use of the bow and spear.

In the case of Xevi Vilaró, the Catalan painter, who is the author of the pieces in this exhibition, the representation of women is a recurring theme in his artwork.

Xevi’s Amazons are warriors, indeed, but their war is not against men, it is much more ambitious. They propose an offensive against the global disaster that is upon us and they, as females of the species, sense that it is imminent. The media, and a great deal of scientists, indicate unequivocal signs that the way of life as we know it is in danger, and these Amazons, turned into icons of the environmental war, denounce and fight without words, without fuss, from an arrogant hieratic character, typical of those who know they possess the truth.

They do not form infinite series like the figures in ancient friezes, since they are perfectly individualised: some, heirs to the maternal legacy, represent the calmest faction. Invested with a regal serenity, they belong to the realm of entomology, possessing beautiful wings. Others wear ancient masks, exquisite and emotionless, like lady offerors of a strong archaism holding skeletal-birds that illustrate the final debacle that is approaching. Some of these figures go further, anticipating the disappearance of the current homo to transform into an anthropomorphic being with the head-helmet of an octopod, the product of Xevi’s generous imagination.

There are no men in the piece… and there is no need for them. These warriors of today, from the art of painting, elegantly and silently proclaim an endangered environmental reality in a way that others should emulate, demonstrating that everything can be said and done ‘con Arte’. 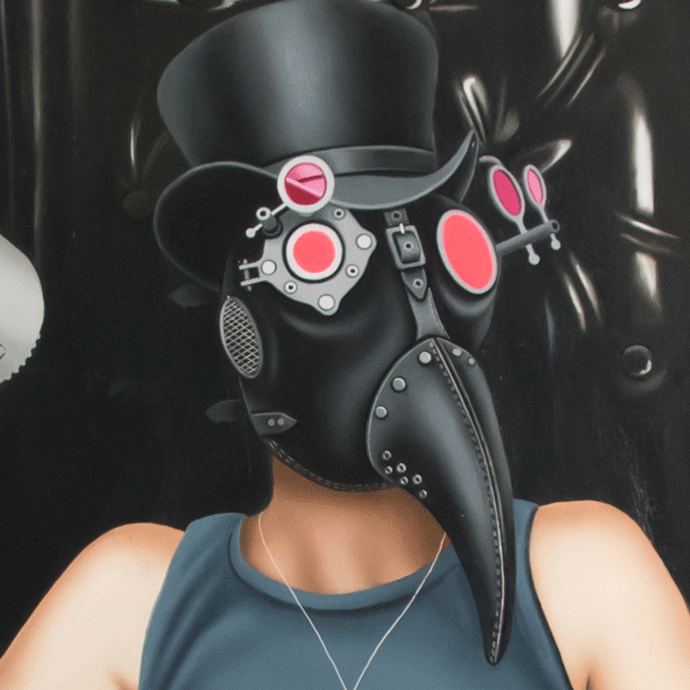