Posted at 10:18h in Art Fairs, Uncategorized by Stoa

For the VOLTA BASEL Art Fair, STOA Gallery proposes a dialogue between the work of three Spanish artists who, through figurative language, take the genre of ‘portrait’ to a whole new dimension.

Our booth project will be based on the immortal phrase of Ecclesiastes:

The concept of our chosen composition is based on traditional Spanish Baroqueism; the deep reflection on the transience of life, drawing attention towards the transcendent.

In order to highlight this concept, we propose a composition guided by the famous “In ictu oculi” by the Spanish Baroque painter Juan de Valdés Leal, who with his “Hieroglyphs of the Last Years” raised the genre of the “vanitas” to its highest levels.

The three allegories of Xevi Vilaró, in which women are portrayed as the new grim reaper of the 21st Century, convey this Spanish Barroqueism through grim, contemporary pop language, immediately pointing us to thoughts of death and the fleetingness of life. In dialogue with these works, facing them on either side we have two complete paradigms that embody the vision of the masculine and feminine world, full of colour and contrasting against the predominant black figures of Xevi’s work.

On one hand, we have the work of Conchi Alvarez, reflecting the personification of a bullfighter and their transformation from man to hero through the art of an utmost risky performance. On the other hand, we have the idealisation of feminine beauty, embodied in the work of ‘Zahara’ by Salustiano.

Xevi Vilaro’s works of oil on methacrylate demonstrate a triad of iconographs of female figures that remind us, irremissibly, of Egyptian deities and classical myths. A mysterious symbolism dominates its compositions in which an icy, emotionless atmosphere emerges. The compositions feature enigmatic, female, anthropomorphic figures with additional details that turn them into nightmare portraits. These figures could even be said to populate the dreams and reveries of our time, as representatives of the greatest fears that hold humanity today. The bullfighter and beautiful lady look on towards these three grim reapers at their fatal attraction.

The work presented by artist Conchi Alvarez, currently in process of being finished, belongs to her series of work ‘the Bullfighter Ritual’, which she has been working on for several years. Through her paintings she delves into the man behind the façade of bullfighter and investigates how, through a ritual that is transmitted from generation to generation, the transformation turning the bullfighters from men into heroes, almost demigods (half man, half god), takes places, in which the concept of death is present at all times.

The artist, a trained archeologist, figuratively digs and investigates who is the man behind the bullfighter is, what their preparatory ritual is and how they manage to become a hero willing to perform in the bullring, where they will look, face-to-face, upon possible death.

In the Mediterranean, the world of bullfighting exercises an ancient attraction. The ritual ceremonies in Crete used to have priests, men, and also women facing the bull. Conchi’s artistic interest is focused on the entire performance ritual, including the build-up before the bullfighter-animal encounter. Capturing the atmosphere dominating the mental and psychological preparation of the bullfighter before they enter the bullring is her main objective in this pictorial series.

Salustiano, a master of pictorial art with a well-deserved international recognition, represents the most exquisite contemporary neo-figuration at the highest execution. His portraits, of elegant classicism and neat finishing, have an impact on viewers by the sculptural effect of the figure that seems to emerge from a flat background, configuring new iconographic types for the genre. In his paintings, the black, red or white backgrounds that he uses floods the pictorial surface, overflowing it, and infecting the clothes of the people portrayed, isolating their skin, and endowing them with a strong sculptural effect.

The profile portrait of ‘Zahara’ reflecting infinite female beauty, forces us to reflect and think about the futility and fragility of life. It also, in an antithetical way, invites us to contemplate that of the bullfighter.

What is the meaning of life? No matter what, death is always upon us. Remember that in the end…everything is vanity. 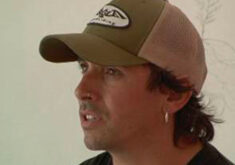 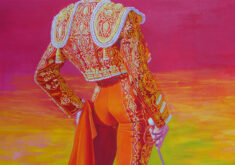